CORONA VIRUS - Please note that travel by air and land from and to Switzerland is restricted until further notice.  A "lock-out" is in place and will be enforced prohibiting all events in excess of 5 people, including spontaneous gatherings.  Restaurants, bars and the majority of hotels remain closed until further notice.  Public transportation is available, sometimes with limited connections or less frequent.  The waering of face masks is recommended but not mandatory as long as a distance of 2 m to the nearest person can be maintained.  First steps to relax restrictions have been taken on May 18, 2020 including, in particuler,  the reopening of schools, most shops and restaurants as as well as personal services such as hairdressers, therapies,  physical fitness centers etc.  Safety measures will have to be respected, resp. applied.  The reopening of the borders is being considered in the course of June in coordination with the neighboring countries.  It remains uncertain, however,  to what extent promotional events of a certain size will be allowed in the remaining months of 2020.

The VUSA Committee Switzerland will be happy to answer questions as far as possible.  Above information will be updated as deemed appropriate

Summary in a Nutshell

Switzerland continues to enjoy one of the world's highest standards of living with relevant high incomes.  Based on its GDP it ranks 19th in significance on a worldwide scale. The country's weath is based mostly on its century long political stability, high level of education and state-of-the art R&D.  One of the main challenges is the strength of the Swiss Franc vs most other currencies, in particular, for its export oriented industry.  It is the result of  the Swiss Franc's role as a safe heaven currency.  Industry has done an amazingly good job to cope with the situation.  However, particularly less qualified jobs  have been lost to low cost countries.  Exports,account for nearly half of the Swiss GDP and grew 2018 by 3.7% topping $ 310b.  In the first 7 months of 2019 exports reached $ 186, down 3 % compared to the same period of 2018.  Inspite of nearly zero inflation salaries will keep increasing by 1-2% countrywide. They are now the highest in all of Europe.  Further economic growth at this time is suffering from the economic slowdown in Europe and the trade disputes between major economic powers. Switzerland continues to enjoy a substantial trade surplus, although lower in 2019 than in the same period of 2018. Per capita income is at 78'816 $.  The renewed weakness of the Euro and the pending trade disputes in 2019 remain a challenge.

Swiss industrial exports represent nearly half of the country’s GDP.  "Swissness" appears to be a brand which sells well worldwide. Lead by the powerfull, hightech pharmaceutical giants most companies continue to successfully streamline processes, improve productivity and cut costs.  The machinery and watch industries, however, after full order books in 2018 seem to have a somewhat less optimistic outlook for 2019 and 2020, in particular.  Interestingly, progress made in automation and digitalization appear to allow certain companies to move manufacture from abroad back to Switzerland, inspite of high local cost.

Switzerland’s inbound tourism, a significant economic sector, after a healthy recovery in 2018 struggles again with the fluctuations of the Euro which dropped in 2019 from a previous 1.15 to 1.08 CHF.  It seems to impact, in particular, on visitors from price sensitive neigboring countries.  Visitation on the other hand from the U.S. and and Asia are up.  KOF,  the prominent economic institute of Switzerland's top university „ETH“ predicts the GDP to fall from  2.4% in 2018 to some 1.4% in 2019.  Worldclass R&D as well a high level of education, however,  remain a joker in attracting foreign investors. Google, e.g. has its second largest R&D center worldwide in Zürich. Other IT leaders like Microsoft and Facebook have been following. The Swiss focus on high value added niche markets and innovation seems to provide the economy with an element of stability vs the world's fluctuations. Swiss industry ranks again among the top in the worldwide innovation ranking of WEF.  Leading edge universities (the country boasts Europe's two top universities) and an "entrepreneur friendly" environment are a key.  Last but not least the banking industry, the country's fourth ranking sector has adjusted to OECD standards and settled most of its tax disputes. Stability and security, typical Swiss qualities, remain a significant adventage for this particular sector and may explain its reputation as a "safe heaven".

Wages, although already among the world's highest,  keep growing and provide for a healthy purchasing power.  They continue to attract a significant  foreign labor force.   Some 1.2 million people from neighboring countries live and find work in Switzerland.  An additional 320'000 cross the borders daily for work.  "Little Switzerland"  often  referred to as an economic power house (see table below) boasts a GDP close to one fifth of Germany, Europe's biggest nation with an eleven times larger population.  Swiss industry is the top foreign direct investor in the EU and ranks 7th as a direct investor in the US providing nearly half a million American jobs.

2019/20 Swiss economic and political position in Europe and outlook

Inspite of its small geographic size, Switzerland is Europe's seventh largest economy, the third ranking trading partner and the top foreign direct investor in the EU.  Located in the very center of the European continent, with a multilingual, multicultural society Switzerland is not a member of the EU, inspite of its close historical, cultural and linguistic relations.  EU membership is presently rejected by over 80 percent of the population.  However, nearly 25 percent of the resident population are foreign nationals, mostly from the EU.  The country is an important workplace for some 1.5 million foreigners including some 320'000 crossing the borders daily for work. The Worldbank estimates that they transfer yearly the equivalent of 26.5b USD to their home countries.  Swiss industry has a well established worldwide commercial network.  It is the result of the historical need to compensate the small home market since the begin of industrialization. Over 40 percent of exports are now going to countries outside of Europe, nearly double of a few years ago.  However, the EU at the Swiss doorstep remains the main single trading partner.

Wheras Swiss bilateral relations to most European nations are excellent, relations to the EU per se remain somewhat less harmonious.  The Swiss political system known as "direct democracy"  (allowing citizens to decide about taxes, regulations, agreements etc.) proves to be hardly compatible with the EU's goals of further political integration and centralization, in particular.  Tensions have increased due to EU pressure for the conclusion of a "framework agreement" trying to closer integrate Switzerland into the EU's legal structures.  Inspite of the obvious economic "win-win" situation growing political demands are now an issue.  A potential massive loss of sovereignty in key matters will be difficult to accept by the Swiss voters who will have the last word on such an agreement.  Interestingly, many international experts see Switzerland with its four official languagues and multicultural society as model for a European Union.

The small size of the country has forced the Swiss to look beyond the borders, in particular since the beginning of the industrialization in the 19th century.   Most speak  one or several languages of the adjacent countries facilitating cross border traffic and communications. Some of the old established international networks still play a role, particularely in Asia.

Swiss, as a result, are ardent travellers inspired by their multilingual resp. multicultural society with 4 official languagues. Some 25 percent of the resident population are foreigners.  Language barriers are low.  English is widely spoken.  Most are well informed about international politics and relevant issues, particularly in major countries and of Switzerland's neighbors. People enjoy ecaping the "narrow borders" of their country and make use of their purchasing power.  In 2018 each resident did an average of 3.5 foreign trips with at least 3 overnights  They spent an average of $ 258.00* per day and person (domestic and foreign travel).  Swiss appreciate service, punctuality and quality and are willing to pay for it.  They tend to travel individually or in small groups, enjoy meeting the local population and avoid crowds.

Booking behavior: 71 percent of all travel was booked via the internet.  This includes bookings on the websites of travel agencies, resp. TO's which seems to be a growing trend (+2%).  The percentage of "self-organizers" dropped in 2018  to seven percent from 13 percent in 2014. About 27 percent use the personal service of  travel agencies the sales of which topped USD 7 billion in 2018  Long haul and complex travel is often booked via travel agencies for reasons of safety, support and comfort. The German speaking Swiss seem to be more safety minded than their French or Italian speaking counterparts. Many young people book at travel agencies to overcome limitations in the use of credit cards
*average exchange rate March 2018: 1.00 USD = 0.99 Swiss Francs.

Total worldwide Swiss spending for out of country travel  in 2018 is estimated to top USD 16.4 billion.

Behavior of Swiss travellers by gender and language/cultural region:*

Access to the internet:  93 percent of the Swiss population uses the internet regularely
as a source of information
Source: Swiss Federal Office of Statistics

Booking preferences for all travel

Where do they get the information from? 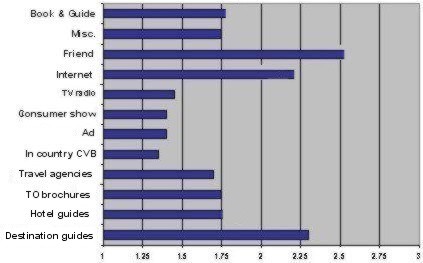 The Swiss travel trade consists of 1100 so-called Class A and about 450 Class B travel agencies.

Average margine 15.6% (travel agencies). Sales grew 2017 by 3.3 percent over the previous year.  Travel agencies charge their clients a handing resp. counselling fee of $ 60.00 which may be waived depending the total cost of a package.

A total of 404'911 people from Switzerland visited the U.S. by October 2019 or 3.1% percent more than for the same period of time in 2018.   The renewed upwards trend seems to be confirmed by the steady increase since 2017 with a plus of 7.12%!   The analyses below over the past 25 years shows the fluctuations but over all a very stable market with an all time record of over 536'000 arrivals in 2015.  The sharp drop in 2000 time was triggered by the value of the USD which topped 1.60 Swiss Francs followed by 9/11 in 2001.  The renewed increase in arrivals is of particular interest considering the critical media coverage of U.S. politics in recent years.  Our outlook remains clearly positive although the U.S. is no longer the kind of "bargain destination" it used to be some years ago.   The focus of our promotional programs is on educating the local trade to improve clients counselling and service.  A goal is to guide travellers also to destinations and activities somewhat off the beaten tracks which is one of the challenges of the mature Swiss market. A large percentage of Swiss visitors have been in the US several times and, as a result, are seeking new things to see and to do.

As of 2018 a total of 15 U.S. cities are accessible from Switzerland by means of non-stop flights.  The new destinations such as Denver or San Diego are  ideally placed to allow attractive one way trips avoiding crowded airports and domestic flights.   The Swiss appreciate the comfort of reaching their destinations without changing planes.  We consider this a strong incentive to consider just another U.S. trip, in particular for the many "repeaters"

An recent analyses shown by means of below graphic shows that Swiss travel to the U.S. is mostly driven by the rate USD vs. CHF.  Political events such as the change of an Administration etc. tend to be less important